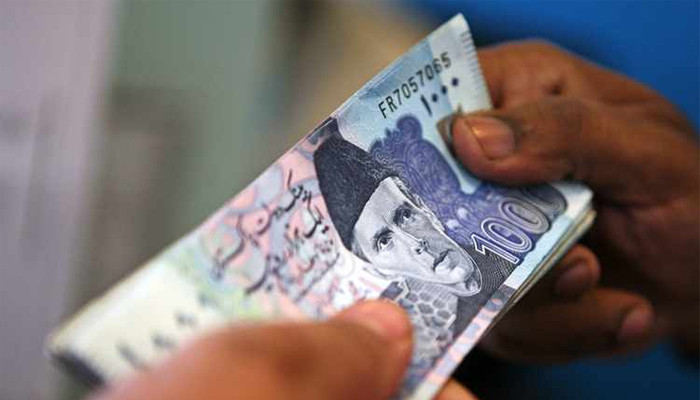 The rupee resumes its downward spiral

KARACHI: The rupee resumed its tumble against the US dollar on Monday, falling by around 53 paisas or 0.31% to reach Rs 168.72 on the interbank market.

The rupee began its descent early last week, hitting an all-time low of Rs 169.12 on Wednesday, from Monday’s opening value of Rs 168.09, which represents a fall of 1.03 Rs in three days.

However, by the end of the week the local currency had recovered to Rs168.1.

The Pakistani rupee is expected to remain stable against the greenback during the current week, according to some analysts.

Analysts said the rupee is expected to trade within the existing range this week amid a match between dollar supply and demand, while the central bank’s monetary position will also be taken into account.

It is relevant to mention that in a surprise move, the State Bank of Pakistan (SBP) on Monday raised the key rate by 25 basis points to 7.25% for the next two months.

â€œIn response, the rupee has depreciated 4.1% since the last meeting of the Monetary Policy Committee (MPC),â€ he said, adding that the MPC noted that many other currencies have also appreciated. depreciated recently, as expectations of cuts from the US Federal Reserve have moved forward.

The statement said the MPC noted that the flexible market-based exchange rate regime has worked well since its introduction in June 2019, including through the COVID shock.

â€œSince its IPO, the rupee has moved in an orderly fashion in both directions and has only depreciated 4.8% to date, far less than many other emerging market currencies during the same period. “, did he declare.

The central bank further noted that since the launch of the rupee, SBP’s gross foreign exchange reserves have nearly tripled to a record $ 20 billion, while net international reserves have increased by nearly $ 16 billion. dollars between end of June 2019 and end of August 2021.