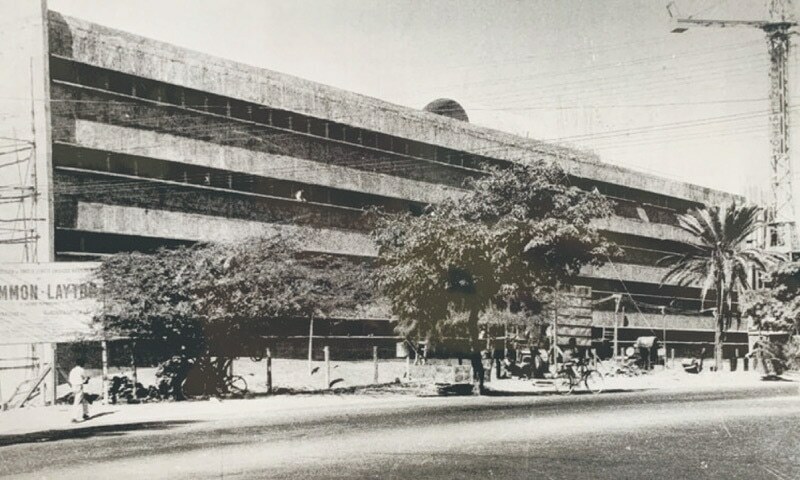 There was one thing many of us struggled to study in schools in Karachi: English grammar in high school and composition by PC Wren and H. Martin. Some hated it but others loved it. It had been part of the study program in India since 1935 and was transported to Pakistan after the partition.

This book with the brown title was contained in our binders but we were totally unaware of its connection, otherwise, with Karachi.

One of its two authors, Major Percival Christopher Wren, joined the Indian Education Service in 1903 and was the 16th Principal of NJV Secondary School in Karachi from 1904 to 1906. Between 1903 and 1907 he also served worked with the Inspectorate of Education for Sindh and at a teacher training college. Wren and Martin wrote this grammar and composition manual for the children of British officers in India. It was also taught in Burma.

Wren, an Oxford graduate born in south London, worked as a sailor, costume designer, boxer and cavalry rider. He also served in the French Foreign Legion, but is more recognized as an educator – a schoolmaster, a college principal, a deputy director of education – a novelist and a writer.

It is in Karachi that he meets his second wife. His son, Percival Rupert Christopher Wren, was born to his first wife, Alice Lucille, in Karachi on February 18, 1904. Alice died in Poona in 1914. Wren married Isabel in 1927 and adopted her son (from her first marriage), Alan Graham-Smith, who became the sole administrator of Wren’s estate.

A little-known story about a saint’s shrine on Abdullah Haroon Road was documented as an urban legend by a British educator in Karachi in the 1900s. With the subsequent construction of the United States Embassy on the site, it found a sufficient basis to be recorded as a piece of history

Wren has written over 33 novels and short stories. His first fictional book, Dew and Mildew, about a haunted bungalow in India, is based, some say, on real events and the author’s experience there. In it, Wren recorded the events of a pirate curse at a site on what would become Abdullah Haroon Road.

Sudden Death Lodge is the story of a pir from Karachi whose grave was lit by a small oil lamp. A naked fakir sat there under a peepal for 50 years as a guard. A wealthy Seth Parsi, Sohrabji Rustomji Potwallah, decided to erect his bungalow on the site. The fakir begged the rich seth not to disturb the pir’s resting place and cried. Unperturbed, the seth was determined to raze the grave, expel the fakir, and build his mansion there. The fakir cursed the seth, saying the building would never be used for nothing and died.

Construction work has started. But during this time, three builders encountered mysterious deaths, just like the chowkidar.

When the bungalow was completed, the Potwallah family moved in. That day, Seth’s nephew accidentally fell from the stairs and died. Then a few days later, it was seth’s son who fell from the railings, ruptured his spleen and died. A third member of the family, her grandson, caught his wrist on a nail. He became infected and died of sepsis. Eventually, the merchant himself encountered a fatal accident.

The house was sold to Mr. and Mrs. Reilds, as a result of which their manager suddenly died of cholera. Within weeks, during a strange event, Mr. Reilds slit his wife’s throat in that same house before taking his own life.

The mansion thus became known as the “Sudden Death Lodge”.

Therefore, the building was razed in 1925.

The site remained a dumping ground until it was chosen for the new United States Embassy. Construction began in September 1957. During its construction, similar strange events occurred. An electrician died on the job under unexplained circumstances. It would likely be the first time in the history of the US State Department that it bowed to superstition and altered the original architectural design, sparing the exact location of the Pir’s Tomb.

Years later, the history of the lodge was rediscovered by Barbara Lamprecht, who is considered a world authority on architect Richard Neutra, one of the embassy’s leading architects.

In Modern Resources, she says: “The curse of a 19th century fakir seems to have settled on the skeleton of a new American embassy being built here. According to a widely accepted story in Karachi, the fakir cursed the embassy site years ago. He claimed the plot contained the tomb of a holy man and warned against any construction. To illustrate his point, he rocked dead.

The property then belonged to a wealthy Parsi merchant who ignored the fakir and continued with his plan to build a mansion. The house later became known as “Sudden Death Lodge” after the merchant, his son, three laborers and an English couple all died by accident or violence.

The house was demolished in 1925 and the land turned over to landfill until it was chosen as the site for the new US Embassy. Construction began in September 1957. To date there has been only one fatality, that of an electrician. But the curse lingers in more subtle ways.

The new four-story Embassy, ​​designed by RJN and REA of California [Richard J. Neutra and Robert E. Alexander], was to be completed last March. Contractors now believe the building could be finished by the late 1960s. Others doubtfully mention a year later. [It was apparently finally completed in 1961.]

Enormous amounts of government red tape and an admirable desire to contain spending in US dollars helped the curse. Although construction cost estimates are $ 31.2 million, Washington has decreed that only a tenth of that amount will be in dollars. The remainder will come from local currency accounts that US air programs have set up in foreign currencies. This has reduced a monumental supply problem, particularly with Pakistan lacking most of the equipment and building materials needed to meet US government specifications.

The curse of the fakir is also found in the American franchise Ripley’s Believe It Or Not! (1965). The story written by Wren is now generally considered to be a true account of events.

When we were in school, many in Pakistan did not know the author, nor his association with Karachi. But the same PC Wren, whose textbook taught us English grammar, was the first to write the story of the curse that resurfaced decades later.

The author is a consulting physician based in Essex, UK

BQ Learning: Understanding the Convertibility of the Capital Account