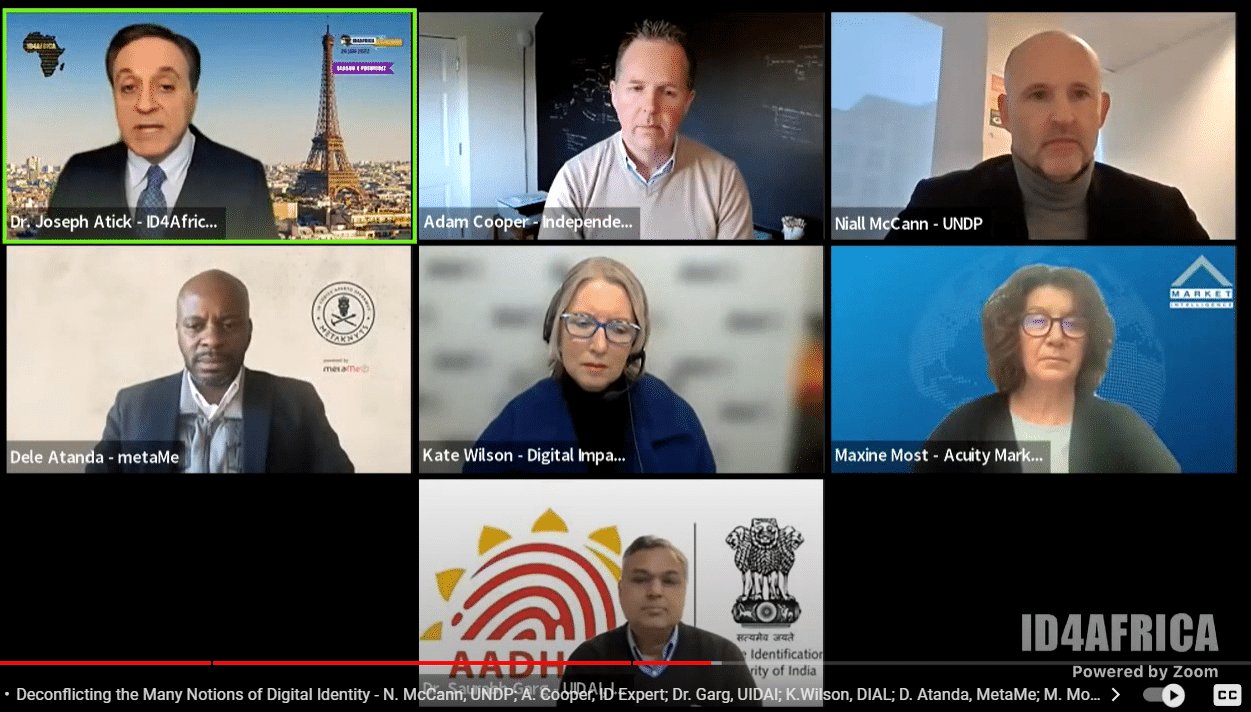 ID4Africa: the future of digital identity in the real and virtual world

“What is your conception of digital identity? may seem at first glance to be one of those trivial questions in the industry and taken as a distraction. But not at the request of Dr. Joseph Atick from a panel of identity experts in the ID4Africa LiveCast Four Premiere series, now available on Youtube. It is essential infrastructure, a human right, a source of power and agency.

The panel titled “Deconflicting the Many Notions of Digital Identity” in episode 26 of the ID4Africa series brought together experts from national digital identity systems, the UN, the private sector and civil society to discuss digital identity in real and virtual contexts or metaverses.

In or out of the metaverse, what will digital identity be?

“Whether you’re a skeptic or a believer, it’s not hard to see that such a world is going to require a trusted digital identity layer as the foundation of its infrastructure,” says Dr. Joseph Atick, Executive Chairman of ID4Africa, on the concept of metaverse. . “What is this new digital identity? How can we affirm it? Who issues it and who has the power to trust it?… Government regulators will insist on some sort of link between our virtual identity and our official or legal identity.

Atick asks what we can expect from digital ID, as people come to see the idea of ​​a decentralized self-sovereign identity with ways for holders to add attestations from entities such as schools to confirm elements of their identity as the most human rights-compliant option.

“Digital identity is not only changing our notion of what digital identity and digital transformation is, it is changing our very perception of what identity is,” says Dele Atanda of MetaMe. He believes there is a confusion between identity and identifiability which is of concern from a human rights perspective. Systems see identity as objective, but it is subjective in a modern world according to Atanda, resulting in conflict.

“We think the public’s confidence in the integrity of the identity system is then shaken knowing that there are so many deaths still floating around in the database,” says McCann, who thinks people should be able to authenticate their identity until birth. when they become adults.

Looking to a future where digital currencies become mainstream, McCann says, “I just can’t imagine if governments start opening accounts for individuals at a central bank and governments send money to that wallet of digital identification that is held for them at a central bank, I simply cannot imagine a scenario in which that identity – one where the individual interacts directly financially with the government – could co-exist with other identities such as passport or driver’s license databases or separate social security databases, etc.

“That suggests to me that governments are going to try hard to centralize identity systems even more.”

Kate Wilson of DIAL (Digital Impact Alliance) agrees that policy must ensure that digital identity continues to be linked to citizen register and vital statistics, an approach that will involve controlling the pace.

“It’s really a national digital transformation journey. Digital ID is a fundamental first thing that’s at the core,” says Wilson, “And while we’re doing that, we need to talk about the products that are available and the the way you deploy them kind of creeping in. so you’re not looking for some sort of big bang approach but you’re looking for something that can actually be funded and deployed now.

Maxine Most of Acuity Market Intelligence also sees digital identity as fundamental: “I see it as essential infrastructure for the 21st century. We simply cannot function as companies or communities without an effective secure digital identity infrastructure. People need to be able to use it for both the digital and the real world without giving up too much sovereignty.

Who will play the role of transmitter?

Independent digital identity expert Adam Cooper believes that governments have operated as a source of trust and will continue to do so, albeit in a different way. “We need to separate the credentialing from the trust,” says Cooper.

“It’s not necessarily one identity to rule them all, but there may be some reliable sources of who I am that you could trust over others,” he adds, saying that governments could provide the element of trust in credentials issued by others.

Atanda thinks there is a role where someone oversees how people interact with the state and any organization, but that legislation will have to determine what is allowed for identity, like what a media site social media may request access for authentication.

About biometrics, Most says that “it is incumbent on the developers of this technology to minimize the possibility of the technology being misused”. Trust in government can be based on the context and culture of a locality.

Anonymity in the Metaverse

“I approach this from a human rights perspective: I don’t think you can have human rights in a digital world without some degree of anonymity,” says MetaMe’s Atanda, calling his idea that it may not be appropriate everywhere all the time, but should be in the pattern.

Will people be able to claim coordinates in a metaverse as their own virtual earth? In today’s real-world contexts, proof of address is still essential in digital identity authentication and KYC.

Adam Cooper points out that since the start of EU eIDAS discussions since 2014 on how identity will work across the block, addresses are an optional attribute. An address is just a point in time and quickly becomes less useful.

“So the motive in a way in terms of importance, I would say it has become almost as important as the Aadhaar number itself.”

And UNDP’s Niall McCann warns that governments will work more closely on tracking the location of their citizens to determine where they are and where they work, in order to tax them appropriately, from laborers to digital nomads. This will lead to greater centralization of data on individuals.